Winter solstice in the Antipodes 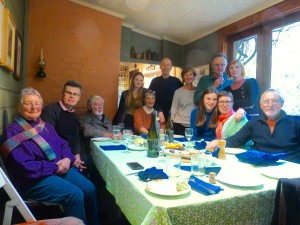 Winter solstice lunch in Sydney
The lunch needs placing in a historical and cultural context.
Historically is has its roots in the Viking invasions of Anglo-Saxon Britain, particularly the north of England, what is now Yorkshire, over 1000 years ago,
The ingredients of the winder solstice lunch are: black pudding, pork pies, and mushy peas.
The black pudding, made of pigs blood, symbolises the defeat, slaughter and subjugation of the Anglo-Saxons by the invaders.
The pork pie represents the appropriation of local agriculture; the pork content symbolises the plundered livestock, the pie crust surrounding it, symbolises the containment by the invader/settlers of the English rural economy.
The greenness of the mushy peas represents anticipation of forthcoming spring that will slowly unfold after the winter solstice feast as the sun rises higher in the heavens, leaving winter behind.
The End
(Wikipedia contested)