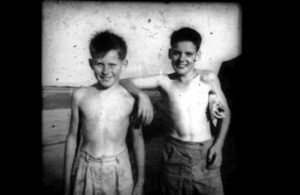 Those readers who love the Danny and Michael tales in my collection of short stories, Meridian, will be able to meet them again soon in a new collection to be published in the not too distant future.

Here is one of the stories.

The tar in the streets’s bubbling. You can pull it up with

your fingers, roll it into a ball and throw it at somebody.

It doesn’t half hurt if it hits you. Mam ses it’s a stupid

thing to do and could take somebody’s eye out.

Michael and me are going to the big swimming pool —

like everybody else. We rolled our togs up in our towels

and caught the trolleybus into the city, walked across the

centre and up the other side to the pool.

We weren’t half hot by the time we got here. The

queue’s a mile long up the hill. We’re never gonna get in.

We could get sunstroke waiting. Michael says we should

go to the canal instead but that means catching another

bus. Mam’s always told us not to because you get polio if

you swim in the canal. Michael said you can catch polio

rather get polio than take cod liver oil.

Three big kids come and walk straight to the front of

they’re from White Abbey, ‘Shite Abbey,’ that’s what we

call it. Just because they’re from there doesn’t stop

everybody yelling at ‘em. A little kid sneaks up and spits

on the back of one of ‘em then, dashes back to his place

in the queue. He would’a really copped it if they’d turned

We all make so much noise that an attendant comes out

and tells us to shurrup. He ses if the queue jumpers don’t

go to the back none of us’ll get in. We cheer and boo as

the three walk away.

It’s hot standing in the sun. I’ve got a new T-shirt, blue

and white stripes. My arms are burning and going red. So

“If you get too much sun you turn into a blackman,”

“Dennis’ told me at school.”

“It doesn’t go black. When you get really burnt you can

peel off the dead skin. You’re white underneath.”

“His dad’s seen it. How would you know?” Michael

He’s a real pain our Michael, a real know all, even

though he’s younger than me. I belt him on the head with

my togs but he just laughs.

We move slowly forward in the queue as kids come out

of the baths, hair still wet, skin white and shiny, their

eyes red. I can smell the chlorine.

Eventually we get inside. It’s lovely and cool walking

on the tiles. Michael and me squeeze into the same

cubicle to get changed. I chuck Michael’s swimming togs

and he stands there with hands covering himself. He has

He puts his towel round his waist and rushes out. When

he comes back he throws my underpants out. They’re all

A big, baldy attendant shouts at me, “Any more from

you two and yer out!”

We don’t say owt, just go through to the pool looking

straight ahead as though baldy’s not there. That always

It’s packed. And noisy. There’s hardly any space in the

and jumping in and ducking each other and an attendant

echoes in the roof way above us.

I wade in at the shallow end. Michael does a

somersault and makes a huge splash. The water’s cold

after the sun, like when you get into bed in winter. I duck

my head under and blow bubbles. I keep my eyes open

even though they sting. Everywhere I see white legs

under water for the longest. He ducks first and I count.

He comes up spluttering, water streaming off his face, “

“It were seventy,” Michael shouts above the noise.

“It’s seventy now,” I say when he comes up choking.

I pinch my nostrils together and go under. I sink and try

to sit on the bottom. It’s all legs and bodies ’n feet, ’n

A girl swims passed me like a mermaid. She looks me

straight in the face and blows bubbles. She nearly makes

me lose count. I’m up to twenty-seven. I have to beat

and blows more bubbles. I bet she’s been up for air.

It’s really hurting. My lungs are gonna bust. I can see

Michael’ legs. They’re bent at the shins and are bluey

fifty-eight-nine-sixty! I shoot to the surface just before I

It takes forever to get me breath back. “Liar! It’s sixty,”

Michael just laughs and pushes me under again. When

I come up with my mouth full he’s disappeared among

the bodies. He always cheats but I know I won.

I find some space and swim a few strokes. I’m best at

backstroke but when it’s crowded like this you bump into

hands come over your head. So I do breaststroke. You

can see where you’re going. But someone gets in my

way and I have to stop. It’s the mermaid. She smiles. It’s

a real nice smile. She wears one of those rubber caps.

White. Her bathers are white too and have little bubble

that does it. The costume shows her arms and her

shoulders. They’re pink where she’s been in the sun.

Then she’s gone. But I see her again on the other side of

the crowded pool. She’s looking at me. I get a funny

feeling in my belly, like being on the front seat of a

double decker trolley bus when it goes head-long down

Church Bank, frightening and exciting at the same time.

I try to swim towards her doing the Australian crawl

because it makes you look good when you can really do

it. I can’t. But I’d look stupid doing backstroke.

Michael appears next to me. “I can swim all the way

across underwater. Bet you can’t,” he boasts.

“I can do the length,” I tell him, and keep going. I tried

once. I thought I was gonna drown. One of the big kids

in school can do it. I’ve see him. I’ll practise another

Mermaid has disappeared. Then she bobs up again and

is looking at me. She doesn’t smile or anything, just

looks. She doesn’t seem to be with anyone.

By the time I get to her, she’s gone. I mean, where she

was, she isn’t. Maybe she hadn’t been looking at me at

all. Maybe she’d been looking at someone behind me.

bragging about what he can do, most of the time he can’t.

The attendant might have chucked him out for messing

Suddenly the mermaid’s next to me again. “I saw ya

“I wasn’t.” You should never let girls know that you’re

looking at them. “I’m trying to find Michael. He’s my

She stands in front of me, water up to her waist. Her

cozzie’s too big . It hangs loose and I can see her titties

under her togs, like two little raspberries. I try not to look

“He might have drowned,” she says. She doesn’t smile

I wonder which stroke I was doing. That’s the trouble

when it’s crowded, you can’t show how good you are.

“So are you. You stayed under for ages,” I tell her.

She nods, as though it’s good to be told something

I’m close enough to touch her. But I daren’t. I’m close

enough to kiss her.

Michael surfaces next to me. He doesn’t even notice

I’m talking to her. He’s just so ignorant sometimes.

“I did a whole length underwater,” he brags, blowing a

stream of water in my face.

He’s always lying, there isn’t enough room to swim a

not interested in him. Then he sees the mermaid standing

in front me. He looks at her and looks at me.

“Come on let’s do something,” he says.

I ignore him. I can’t take my eyes off her.

“What’s your name?” I asked the mermaid.

I tell her I like her name. I’ve got a cousin with the

same name. Then I tell her mine, Danny.

I can’t think of anything else to say.

“Danny! Come on.” Michael tugs my arm. I ignore

him. I wish he’d bugger off.

Michael swims away without looking back.

I still can’t think of anything to say to Kathleen. What

do other people talk about?

She stretches out a hand to me.

I take hold. It’s cold and warm at the same time. She

draws me along the pool out of the shallow end towards

the deep end where you can’t even see the bottom.

We begin to swim side-by-side. I do breaststroke. So

does she. She keeps looking at me but never smiles,

except with her eyes. We reach the end of the pool, stop

and hang on to the side, close together. I could touch her

sunburned shoulders. She hitches up the straps of her

loose togs, hiding her titties. I try not to look. I wonder if

she knows I can see them.

It’s my turn to nod.

Why can’t I think of something clever to say? I could

say something about famous swimmers from our town,

but there aren’t any.

“Michael is mi brother,” I tell her.

think, what if she beats me? What if she’s a better

She shakes her head. “No room.”

She turns away, then looks and smiles with the tight

“It’s nice there.” Her voice is soft, almost a whisper.

Maybe she’d swallowed a lot of water. I have. Chlorine

gets to some people.

“Yeah. We came into the centre on the trolleybus and

Then we are quiet, both of us looking around like

we’re trying to find someone, which we aren’t.

Kathleen lets go of the side of the pool and treads

water, like a frog with pink shoulders, white legs, and a

bathing cap. I tread water too and we bob up and down

facing each other. It doesn’t seem to matter about talking

I touch her arm, just brush it. She looks at me but

She feels for my hand, finds it and holds it tight,

underwater where no one can see. It’s like going down

hill again on the top deck of the trolleybus, only the hill’s

steeper and the bus faster. She comes real close and our

legs touch. We stay like that. Then she lets go and tells

She slowly moves away.

She swims to the edge of the pool and gets out, her toobig

I don’t wait for Michael. I collect my clothes and get

I stand by the entrance but she doesn’t come out. She

must have decided not to bother with me and gone

straight home. I wished now that I’d waited for Michael,

but they won’t let me back in to find him.

Other kids step out into the burning sun.

Then she appears. She’s nothing like a mermaid now.

She walks over, a thin, grey towel rolled up under her

arm. She’s smaller than in the pool. Her hair’s long, still

wet, hanging down to her shoulders in strings, dripping

water onto a baggy dress that has once been coloured but

is now no colour. The dress had puffy little sleeves but

one hangs loose where something’s broken. On her feet

she wears pumps that are worn through at the toes. One

of them has no laces.

She smiles at me. This time her mouth’s open. She has

holes in her teeth. That’s why she kept her mouth shut.

I wish I could think of something.

I wish I’d waited for Michael.

I wish I was anywhere but here.

“You comin’ agin tomorrer?” she asks.

“Mi Mam said I have to be home early, I’ve just

remembered,” I tell her.

I look around for Michael. He’s out.

I turn as we run down the hill. Kathleen is walking

slowly in the direction of home, ‘Shite Abbey’.