One of my recent short stories, The Chicken, has been accepted for publication by NSW School Magazine.

The Chicken  is a story of a Moroccan boy who has to leave his family and his village in the mountains to live with an aunt in the city so he can go to school.

Here is the beginning of the story:

My name is Youssef. I live in Morocco. When I became old enough to go to high school I had to leave my village in the High Atlas mountains because there was no big school.

There were ten of us in the family. My parents could afford to educate only one, me.

I was thirteen, the youngest. I wanted to learn and I was excited to be going to live in the big city of Marrakech.

An aunt I had never met offered to let me stay with her family while I was at high school. When the day came for me to go, all my family and friends came to say goodbye. My father gave me ten dirham for food on the journey. He and my brothers hugged me. My mother and three sisters cried. I pretended to cry too and managed to squeeze out a few little tears but really I was so glad to go. So excited. I was happy. I was leaving my village for the first time. But I was frightened too.

I was the lucky one. All my brothers and sisters had worked hard on our little farm to make enough money for me to go to school, then when I was educated, I would help support them.

I had two bags with me. One had my personal things. The other held a live chicken, a gift from my mother to my aunty. The driver told me I had to pay five dirham for each bag. Ten dirham! That was the money for food for the whole journey. I did not want to ask my father for more. I already felt I was independent, a man.

I tried to argue with the driver. But I was very small for my age and he was very big. He held out his hand. More, he demanded. I thought of my ten dirham, and the chicken, and my aunty. I did not want to part with even one dirham. So, I handed the driver one of my bags, paid five dirhams, and when he wasn’t looking, I smuggled the one with the chicken onto the crowded bus.

(With thanks to Khalid Lamlih. The full story will be published some time soon.) 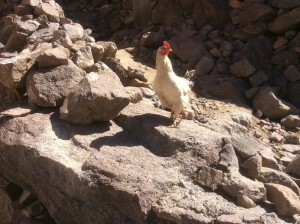 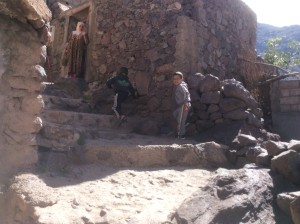