Bourke, you are there…

Once it was a navigable waterway plied by paddle steamers but is now silted and too shallow even for river boats..

Henry Lawson, the revered Australian poet, short story writer and friend of the working men and woman of the bush, spent time in Bourke and trudged the surrounding area in 1892-93. He said in his poem The Song of the Darling River: “And all that is left of last year’s flood/Is a sickly stream of grey-black mud;”.

On my recent visit after unseasonal rains the land was green and the big old river full.

Fred Hollows, the renowned ophthalmologist who did so much to treat eye diseases among Indigenous Australians and others among the world’s poor, particularly Eritrea, is buried in the Bourke cemetery. He regularly attended clinics in the town and formed a special affection for the Ngemba tribe and other local people. 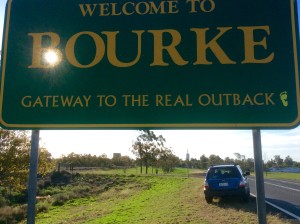 bourers on one side,  and pastoralists on the other. The pastoralists attempted to cut rates of pay through “individual contracts,” which meant each worker had to agree to a separate contract with the owners of the vast sheep properties covering thousands of hectares.

Anyone living in Australia will remember the former Liberal PM, John Howard, trying the same thing eight years ago with the reviled and mis-named WorkChoices laws. They never give up.

The period of bush history that Lawson wrote of is long gone. Bourke is now a peaceful little town of some 2000 people, hoping to draw  the thousands of restless grey nomads that wander Australia and other tourists with its history.

But no cheating, keep your fingers off Google.